if use Arnold operators you can change shading and geometry without any delay in IPR rendering. Operators toegther which Houdini node graph and you have simpler version of Solaris, Katana or Gaffer. the Arnold operators are around for years when even Katana and Gaffer was quite new and long before the idea of Solaris.

Operators allow advanced users to override any part of an Arnold scene and modify the Arnold universe at render time. Probably one of the most common use cases is to override parameters (e.g. shaders) inside a procedural (USD, ASS or Alembic).Here is quite test with 600GB caches file during  Arnold GPU interactive rendering.

As you can see its quite fast to update the interactive rendering. you can the Kick command which used to query possible target node parameter names of a set_parameter node. For example: kick -info or kick -info polymesh. a more detailed tutorial i will do in future posts.

i've used a set parameter to change the radius of the foam particles. radius *= 1.3  or change the particle to 'disc', 'sphere' or 'quad', o change the shader like shader == 'purple_shader' . 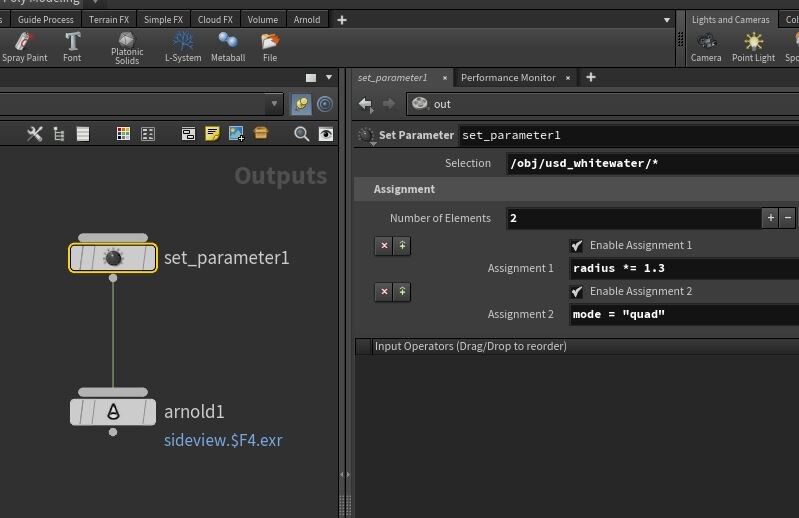 here more detail talk about usage of arnold operators from autodesk and The Mill.

recently i did some water rendering in Arnold renderer, which you can see here. the shading worked quite well on the ocean water and whitewater.

after this started to sim a wave Tunnel in Houdini Flips. a huge wave where you actually could surf. But i run into some trouble for water shading and whitewater look, i needed some reference.

I went to beach and took trusty NikonV1 camera with me to shoot some reference Photos. This are tiny Waves (50cm in height), but easy to take some pictures and good enough as shading reference. 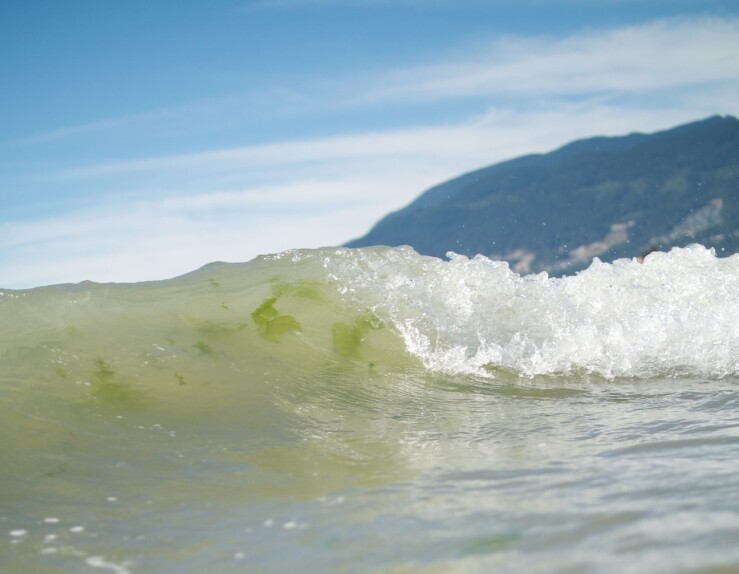 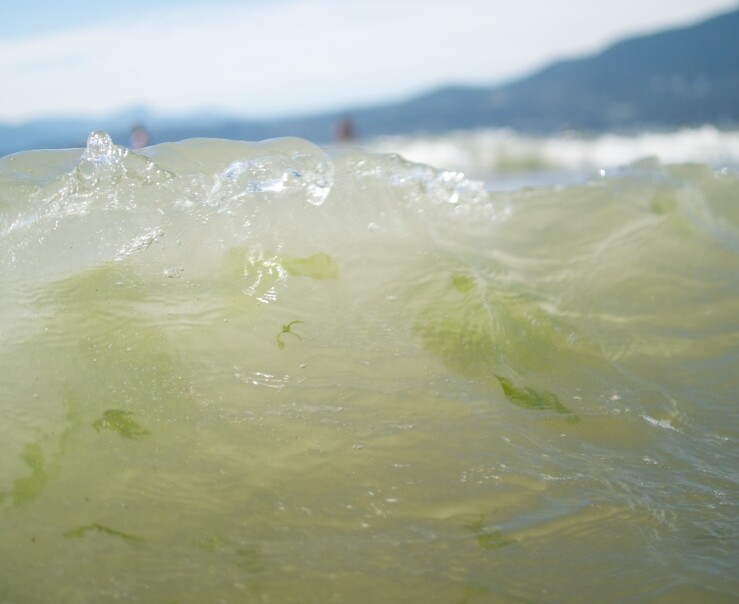 a nice snapshot of translucent effects of the wave, where we can see droplets (whitewater) in close up 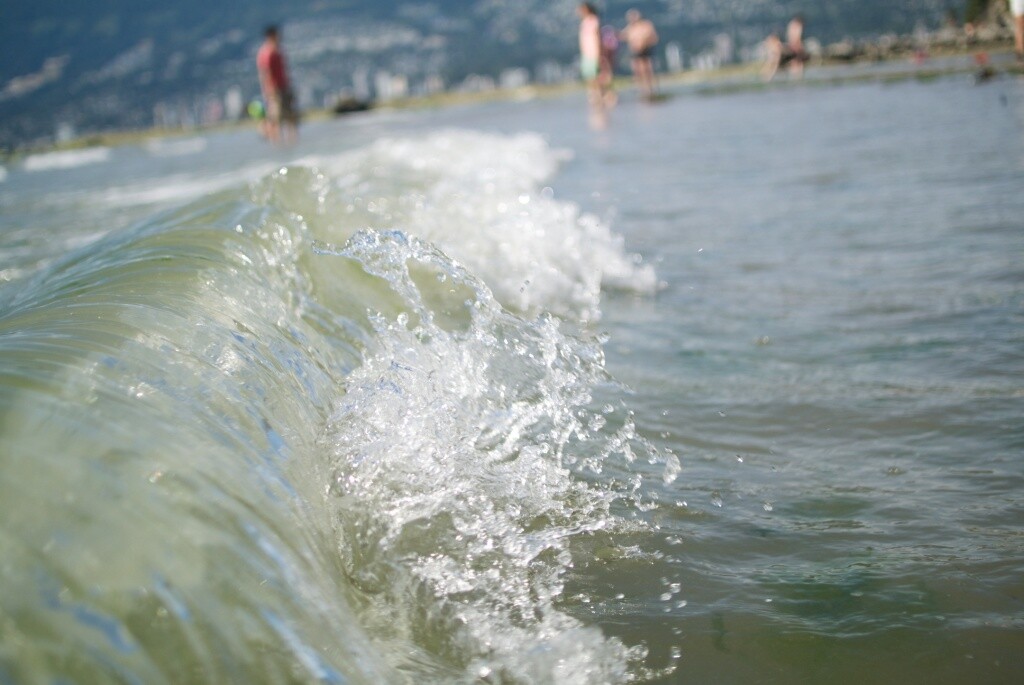 here we can see more Droplets / Whitewater with sun in out back. a good example for anisotropy effect on shading. 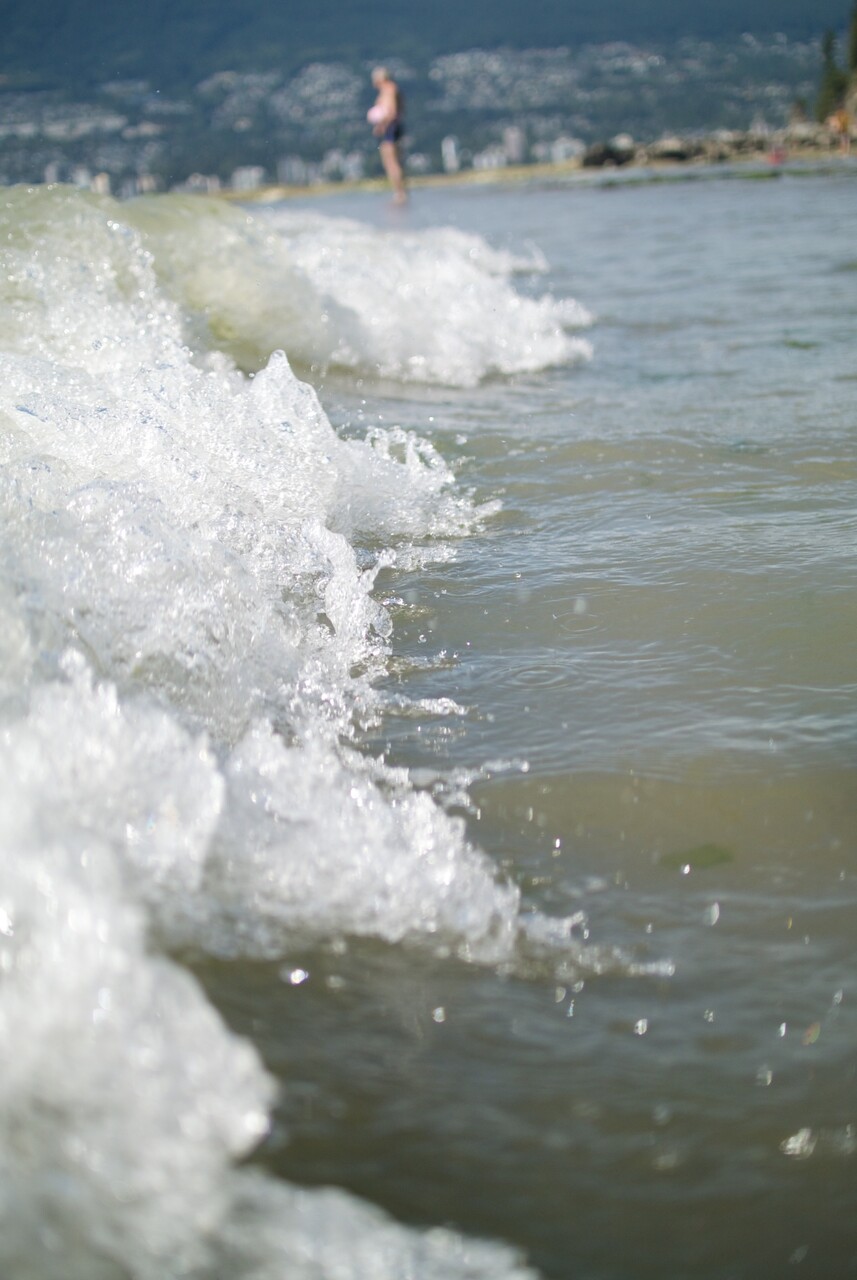 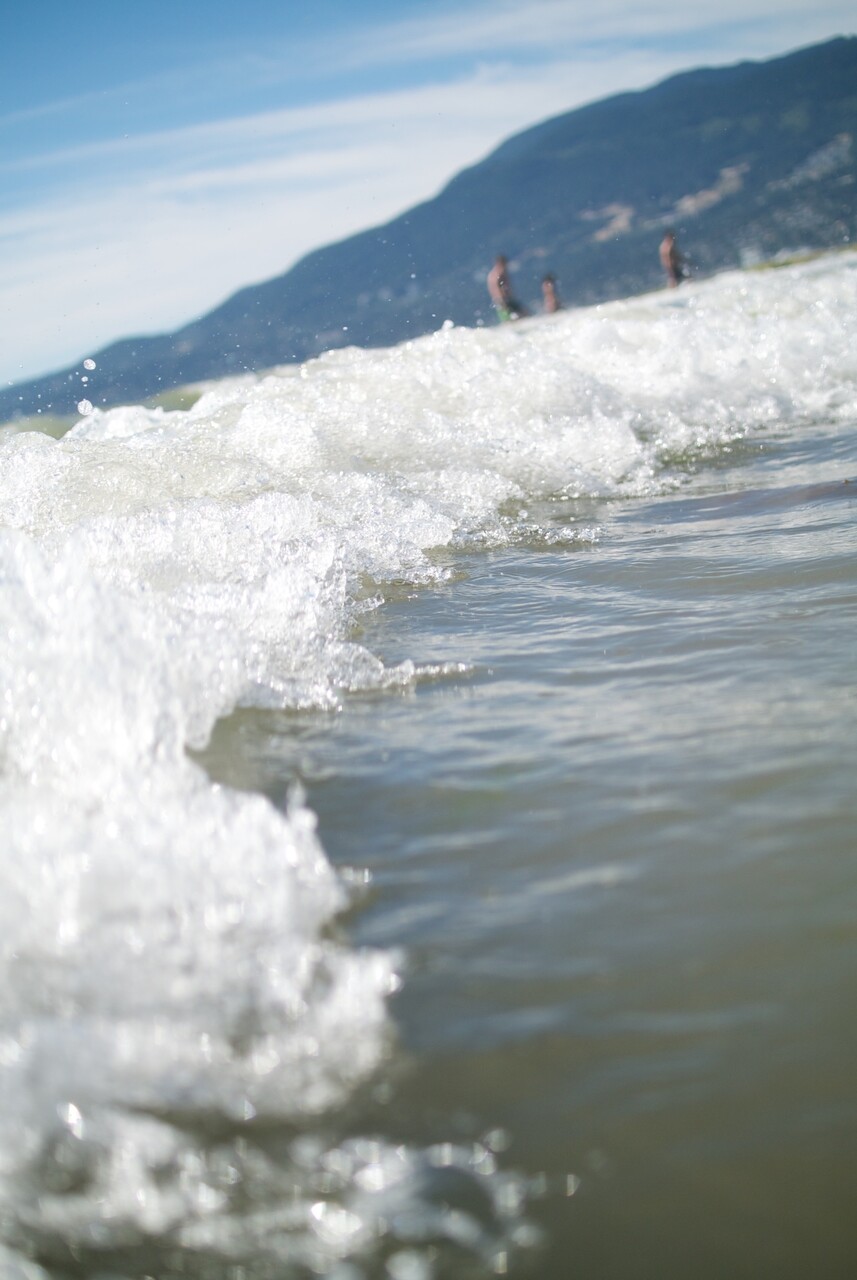 droplets turn white with sunlight, depending on the sun direction. 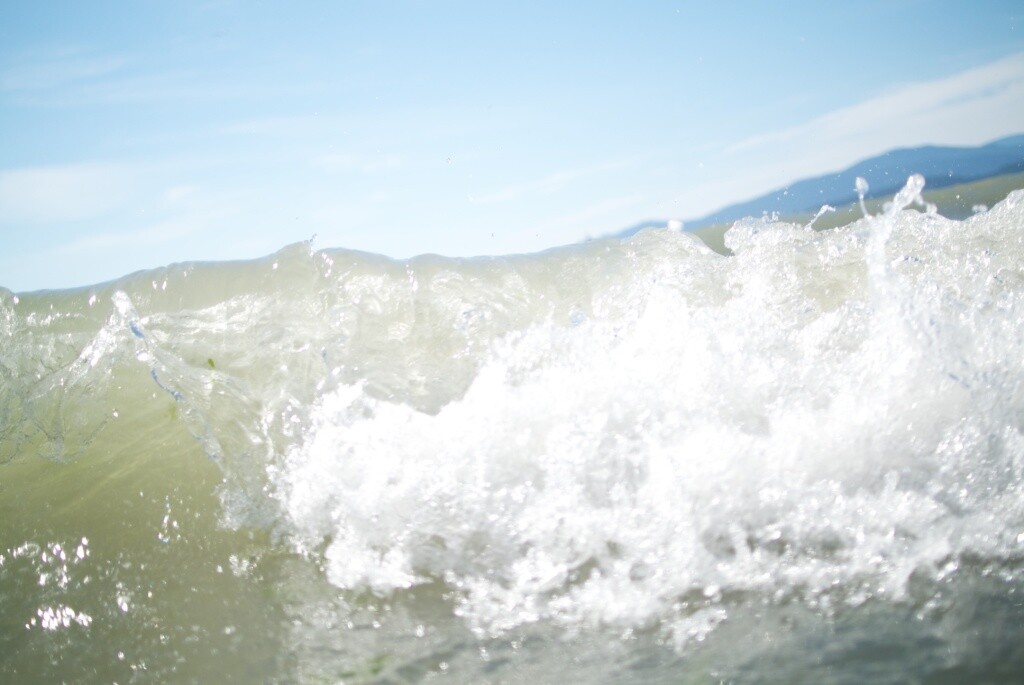 There multiple Ways to render realistic Water. The old school way is to render a polygon water surface and volume underneath to simulate the light scattering. we did similar things back in 2008 on the Avatar Movie with custom written shaders for Renderman. Sidefx added presets for Houdini for its Ocean setup’s. The render time of this method are modest but the shading can quite difficult depending on camera angle and light situation.

these Days in the age of Path tracers, there 2 ways, rendering it with Sub-Surface Scattering (SSS) or Transmission Depth.

Sub-Surface Scattering simulates the effect of light entering an object and scattering beneath its surface. Not all light reflects from a surface. Some of it will penetrate below the surface of an illuminated object. There it will be absorbed by the material and scattered internally. Some of this scattered light will make its way back out of the surface and become visible to the camera. This is known as ‘sub-surface scattering’ or ‘SSS’. SSS is necessary for the realistic rendering of materials such as marble, skin, leaves, wax, and milk. The SSS component in this shader is calculated using a brute-force raytracing method.

While the Transmission Depth attribute controls volumetric light absorption within the object (fog), the Scatter attribute controls what percentage of the light will be scattered instead of absorbed, effectively creating the murky effect of semi-transparent materials.

Scattering is very import if wanna shader deep Materials like Ocean water. For the scattering effect to work Scatter must have a dominant percentage value, and the Depth attribute must generally be much lower. also the Opaque attribute must be unchecked in the Arnold attributes of the object’s shape node for the light to be able to pass into the mesh and illuminate the volume.

Rendering with refraction Depth is more “physical correct” way, but it does account tiny organism (light blockers) in this case you add textures to simulate plankton in the water.

I choose go with SSS route. The tycial Surface Scattering shading model has a similar volume light scatter look. the look can be limited but it works in case deep Ocean water. the advantage: it full support with current Arnold GPU renderer (Depth transmission is not supported yet) and SSS shading model is also faster to render. In addition, I’ ve added an extra underwater bubble simulation with particles to increase the realism.

in one of the next post i will show work in progress with new massive simulation i did.

i am starting to look into water effecst shading, this 1st simualtion with Houdini solvers. the foam is a little over-the-top. but i think the shading itself start to come together. with the new Arnold GPU updates its getting really fast., specifically when i am using Arnold Operators.

i've created underwater bubbles in extra simulation to make the side view nicer.

all this above was done in Houdini and regular Anrold htoA plug in.

here i am testing the scene in Gaffer, the IPR is quite fast in here. the next thing i wanna try to use Solaris.

fractal landscapes rendering in AnroldGPU (pure beauty pass) it looks like an alien world or quantum realm world. i even add astronaut and mars rover in there, if you can spot them. 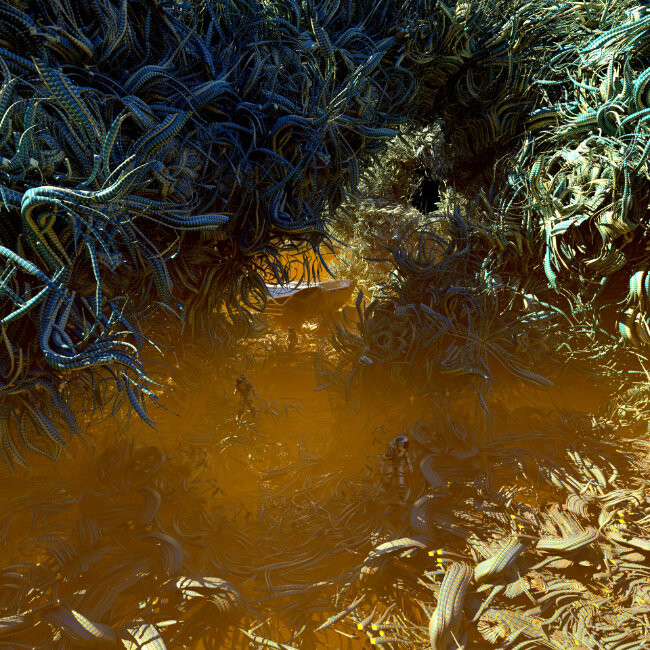 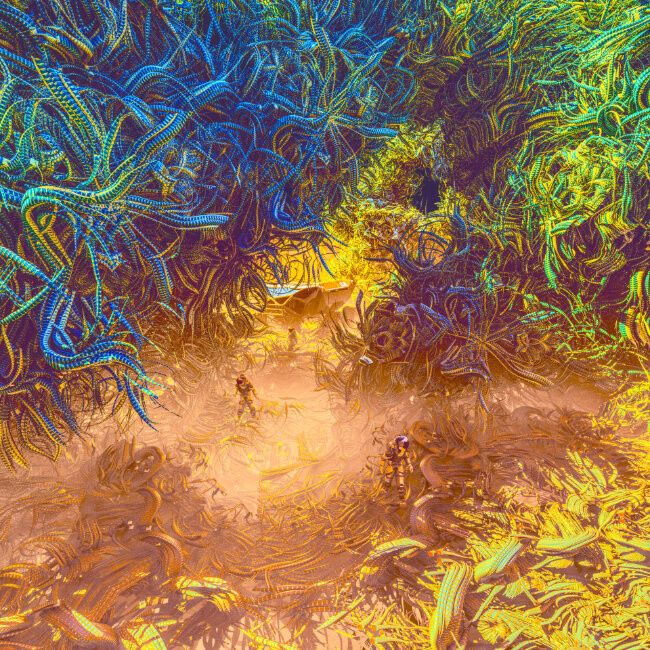 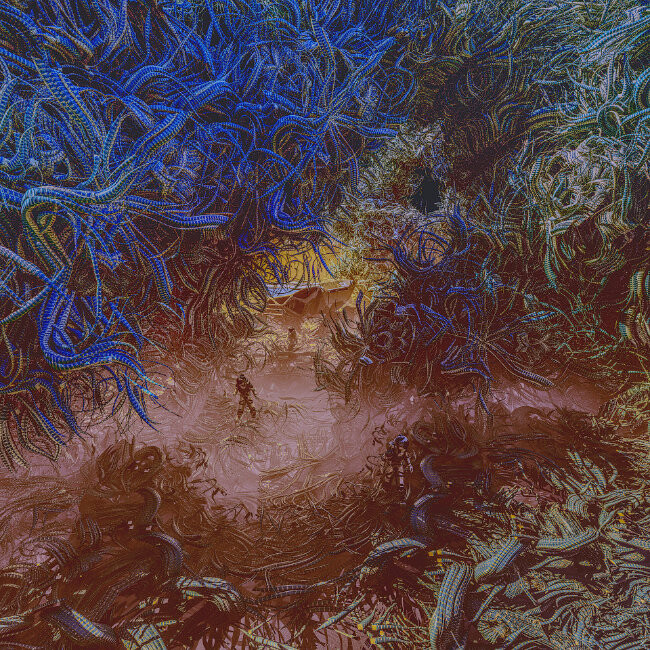 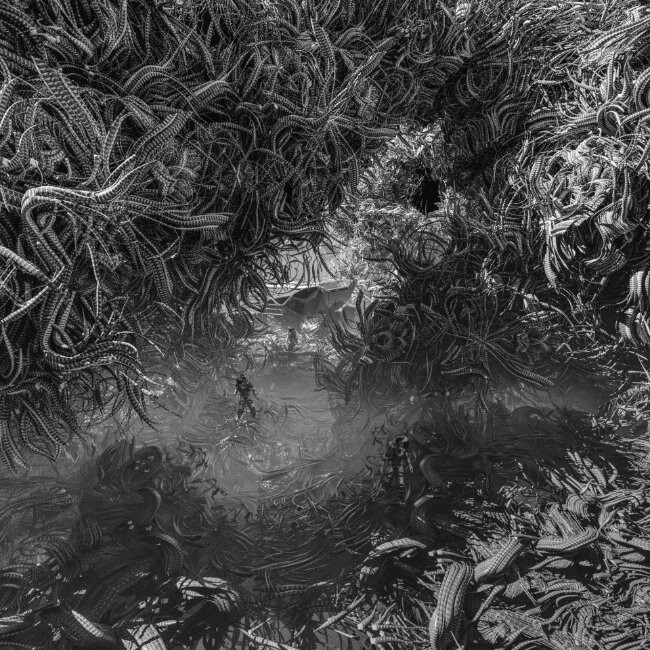 I starting dig up old projects  and scenes i 've finished.  the idea this Project was to take my Fractals and scatter it into a landscapes.  the goal is create a "real" alien landscape. I was looking into "alien landscape" art, but there much to find on the Internet. most alien landscape art is quite earth-like with uber-epics rocks formation or giant Mushroom. the closed thing i found was from games like "no Mans Sky", Ratchet&Clank or Starlink.

so, here we go here one attempt on alien landscape. the camera flight is rendered with 5000 splines primitives done in Arnold renderer.
quick and dirty work in progress!

here some updated beauty renderings:  (all one single renderpass)

having some fun with particles....

birth of a massive star. for my little #astrophysics exploration, i’ve created a star simulation using openCL in houdini. its based on nbody #physics model, only driven by #gravity. using #nvidia #quadro rtx 5000 #arnoldrender.

the colours are not quite right, I am trying to integrate kelvin colour temperature.  the current colour is based on density and speed.

In this simulation, I assumed  48% amount of negative gravity to fill the mystery of dark matter. I used 1 million nbodies for the simulation.  for the steps, I am planning to add finer particle streams to get more details.

rendering  large of amount of particle with a pathtracer is hard. 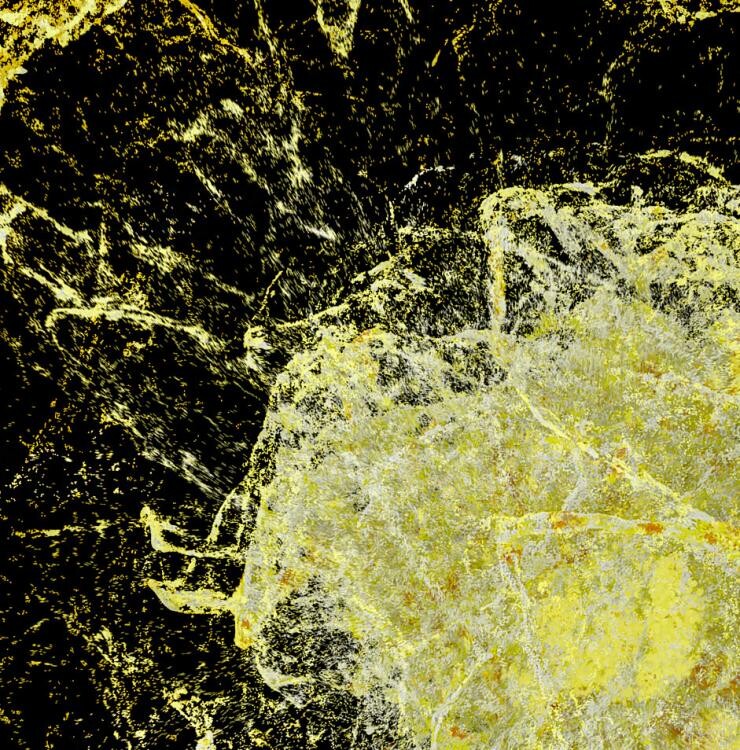 working now version with way more Particles and details. hopefully, i will able to share something soon 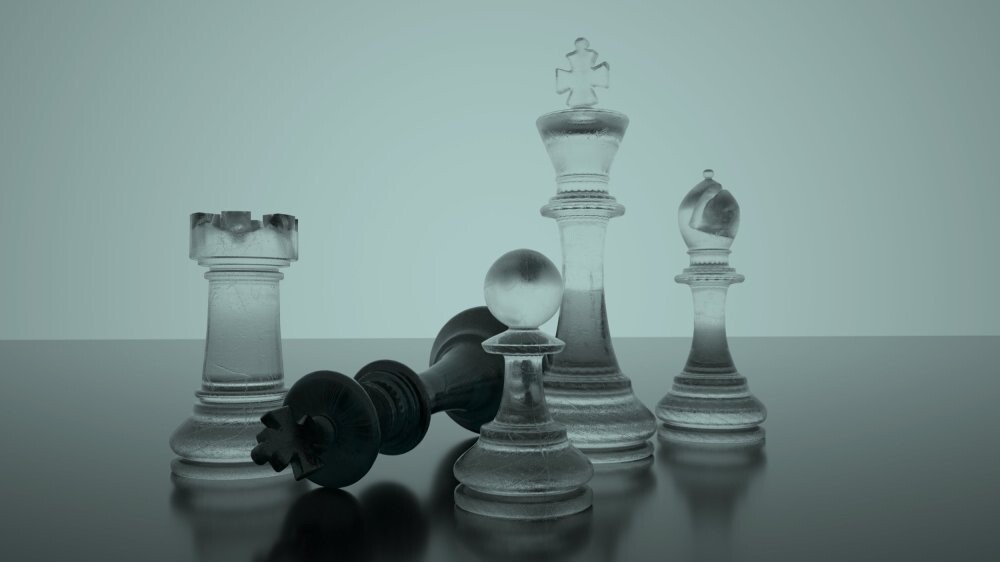 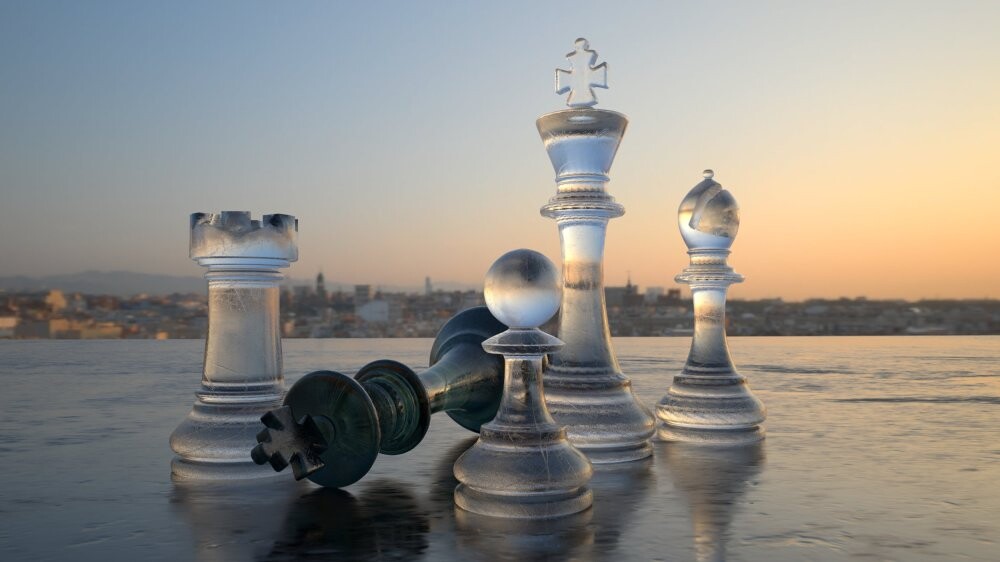 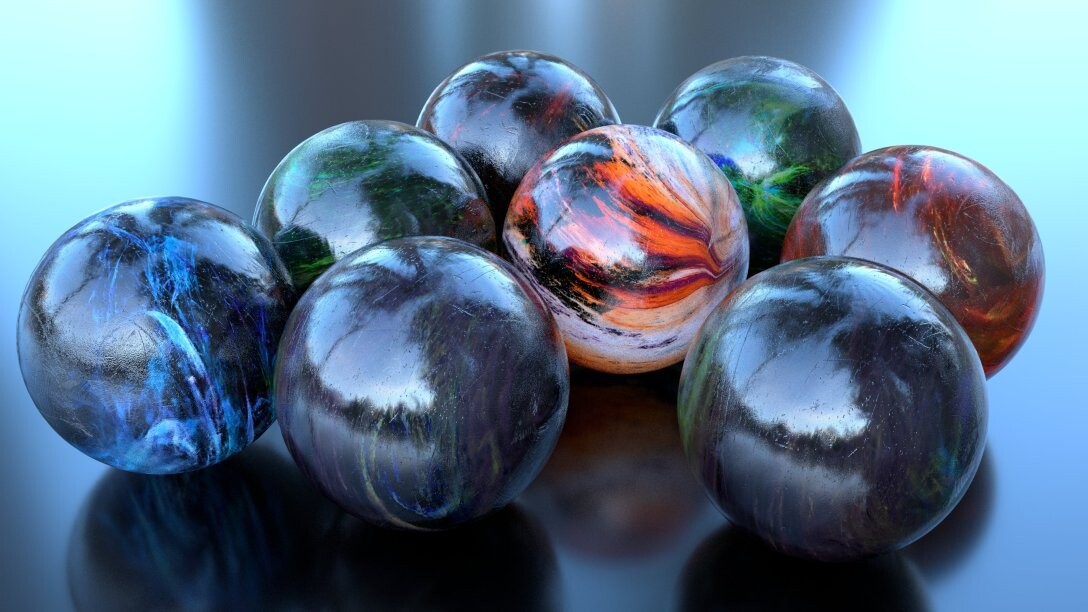 The basic idea, using a glass shader for outter shell and an inner sphere with textured volume to fake depth. this way, you will save a lots of work with actually modeling the inner part of a marble. Spectral renderer don’t use this kind of trickery they can actully the inner part as real glass medium (using textures).

I’ve use Cycles (Blender), Renderman, Arnold, Octane and Indigo Renderer. I’ve tried to create a Marvel in Redshift, but i could make it work with single texture and 2 spheres. For Redshift you need actually model a marvel to get realistic rendering.

here is quick test with single glass object with Indigo and Cycles :

this here are glass spheres with regular solid texture spheres inside: 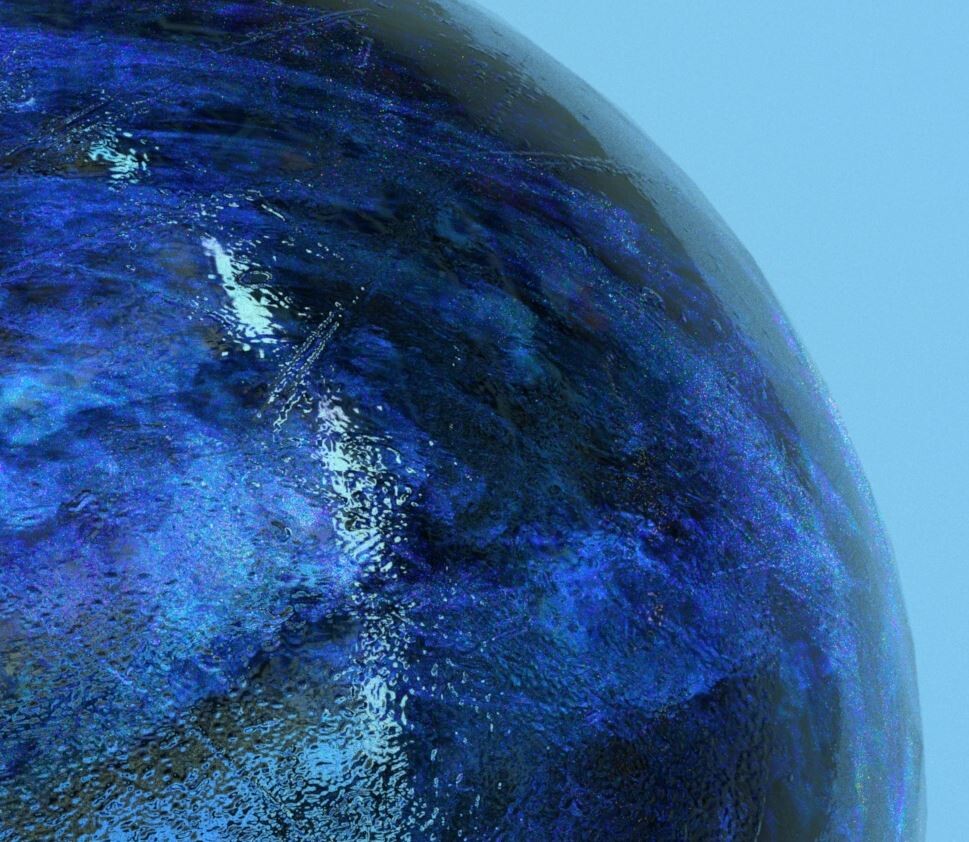 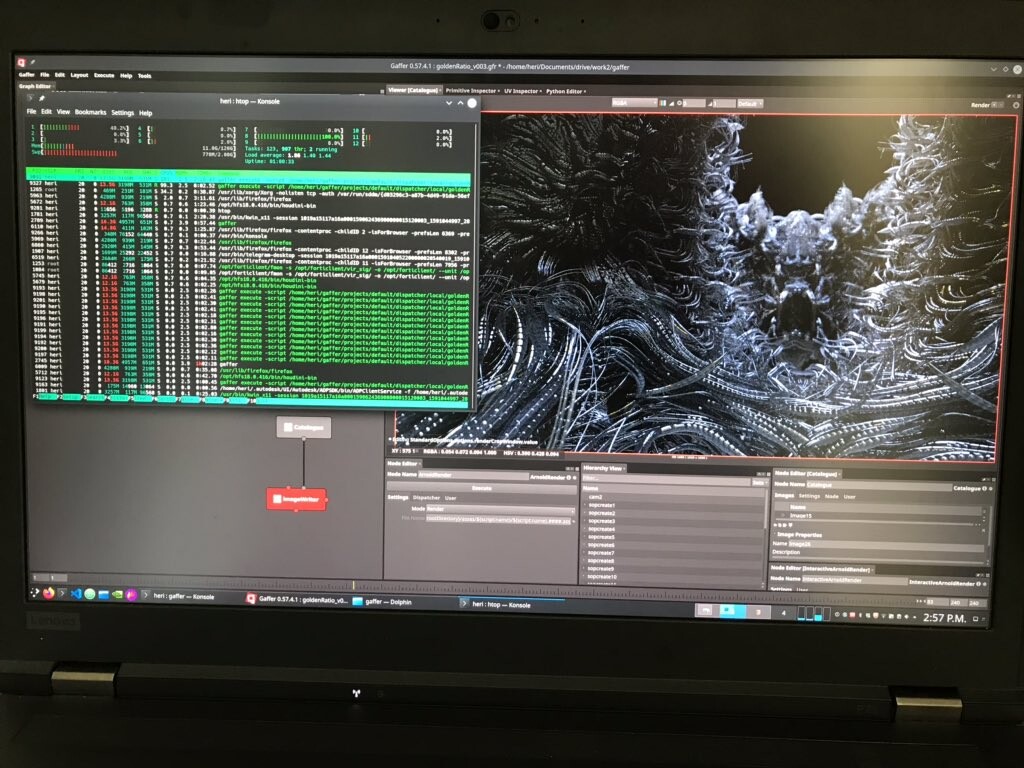 Its a shame, that’s Autodesk HtoA plugin is is unusable. interactive rendering does not takes any updates, except shader values changes and light exposure changes. Also, Arnold6 GPU have big render artifacts with spline render mode set to “Thick”. what it look likes a cool shader, are actually render artefacts. 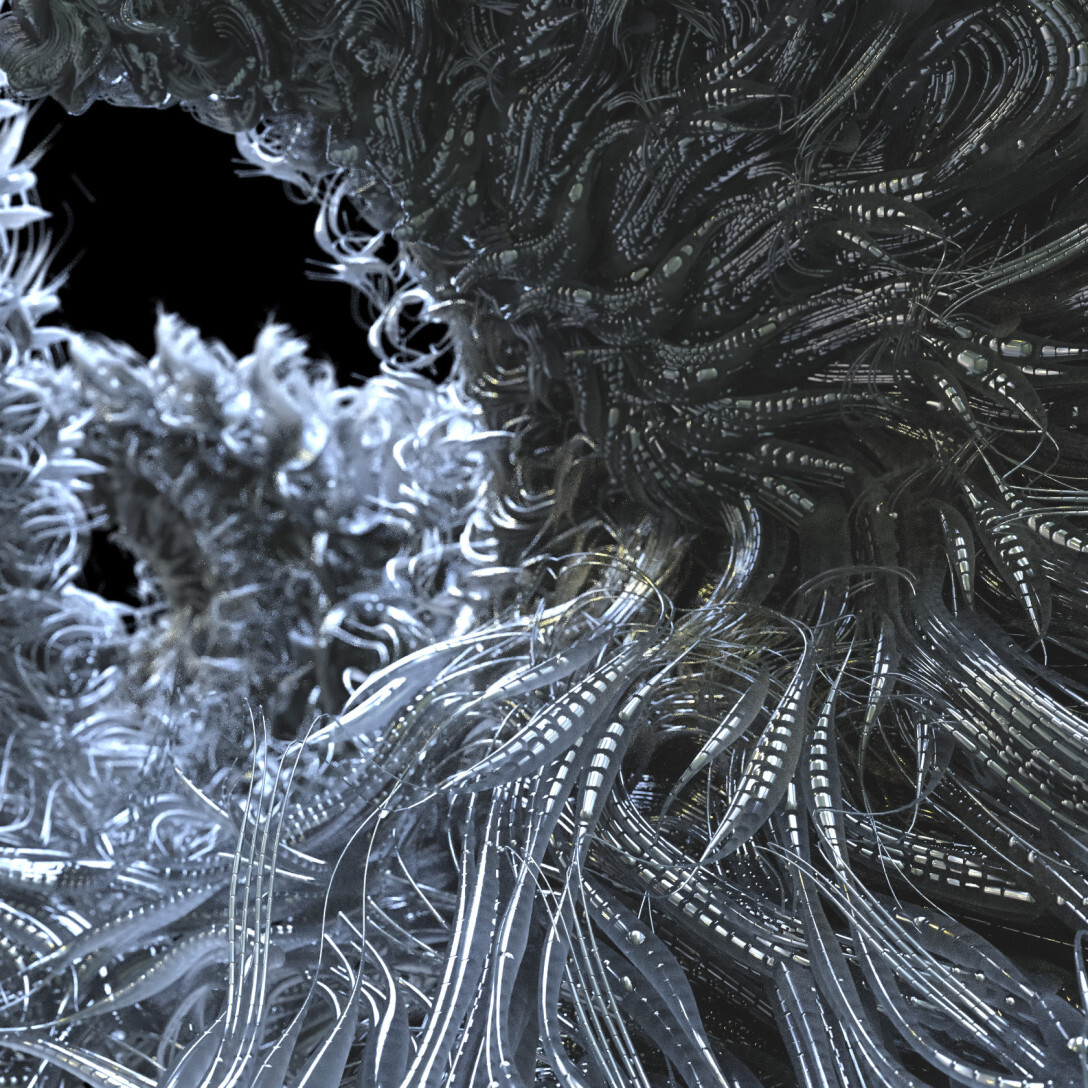 i am starting to use Image Engine Gaffer (opensource software) for some private projects. but vanilla version of the software is quite naked and not very user friendly, so i decided to pimp the software with my own extensions.